A girl with a necklace, vaccinations and an important question! 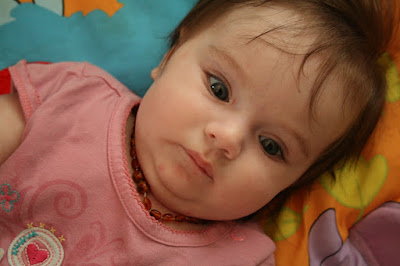 I think Butterfly is beginning to teeth (yikes!) which would explain previous post's EDT.. Asking what can be done to help ease the pain, I was told to put an amber necklace round her neck. So I went out and bought one. Hope it works! Now doesn't she look like a big girl with her necklace :-)?


Vaccinations. I decided I'm going to give her tetanus + diphtheria without the pertussis (as for polio and the other one [can't remember now what] I have yet to decide), and that more or less will conclude her shots. Last time I asked, the nurse at the child's development told me they can't separate and give it without the pertussis, but I heard it can be done.
Anyway, not about that I wanted to talk (and I'll be going in only in about 1.5 months). We have here in Israel child benefits - a small amount the government gives parents (or is it the child through the parents, there was such a debate on one of "my" boards). Up till now, the only condition was that you were Israeli and paid the social security taxes. Now there is a law about to be approved that conditions getting the full sum on giving your kid the vaccinations. All of them, according to the official programme. Which means a lot of shots. I'm less concern about the needle part, more about the dangers (in my eyes) of these vaccinations. I won't go into it here, but I'd much rather my daughter gets most of these diseases as a child. The aim of this law is to get more people to vaccinate, but I think it completely misses. I think the vast majority of people who do not give vaccinations, do so, like me, out of ideology. I will not start giving my girl all the vaccinations to get the full benefit. It is not only a really annoying and totally unfair law, but it also feels like an invasion of my privacy - what is it to them if and what shots I give my daughter? (assuming of course I don't not go out of laziness. A parent who fails to give his/her child her/his shots with no ideology or thought behind it, indeed deserves a "penalty"). Oh well, I think I'll survive with the reduced amount..


And now a completely unrelated and as title suggested, important, question:
There is a hedgehog that comes around at night to eat on the cat food. My sister claims it is "theirs" as he came first to them and husband moved him over here and she/they named him Shmulik. Now Shmulik, an Israeli name, is a name of a hedgehog in a well known children's book. Very not original! Plus I claim it to be "my" hedgehog as he comes to my yard to eat (fact that he comes here again and again. In fact he became quite bold and didn't even flinch when I took a pic of him!), but I have no idea what to call him (yeah, am clueless whether it's a him or a her, so I'll go with a him..). Any ideas of a good name? 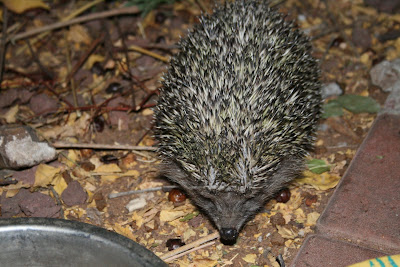 Such a big girl with teething and a necklace! As for the hedgehog, Sonic. Not original either but as far as famous, well known names...

Butterfly is such a cutie. Love the necklace.
I'm not good at original names for critters but I just love hedgehogs. They are so cute.

Over here the issue is school - we are having to get caught up on all her shots for her to continue at daycare, and she will have to have them to begin school. The only exception is if it is against your religion to vaccinate your child, and you need a letter from an official of your church stating that is the reason. Your personal beliefs are no longer adequate reason to not have your child vaccinated.

I'm not sure if we will enter the public school system or attend private school (much will depend on tuition and my ability to afford), so there may be options in the private schools. I wanted to avoid over-vaccinating to avoid issues like allergies, and she has them anyway, so it doesn't really matter at this point. It's just easier to have her get her shots now.

I'm not great at picking names but I was thinking somehting that started with "H" to give you an aliteration...like Hampton or Harrison...

She is such a pretty girl!! Is the necklace working?