[sorry fb friend for the duplicates..]
Butterfly was happily greeting my sister's (and neighbour's) dog when she saw the camera. She of course came rushing to the camera while I was going - nooooo noooo which (as can be seen) made her laugh. I quickly pressed the button (while my other hand was trying to keep her away) before moving the camera out of her reach. I actually very much like the result! 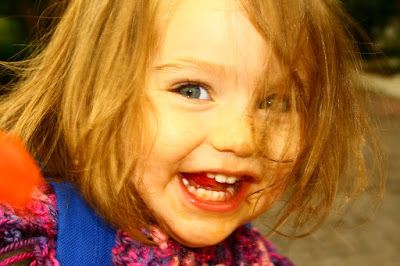 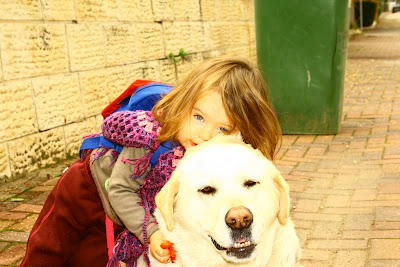 Her best friend! Always when we leave the house for our walk, she goes looking for sister's dog to join us with the walk. 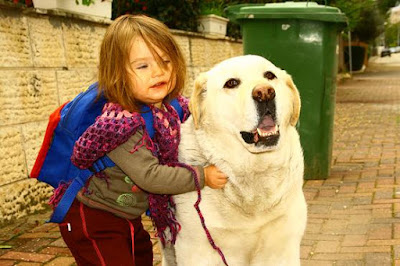 My little girl is very hard at work here! Collecting the stones and putting them in a new location.. 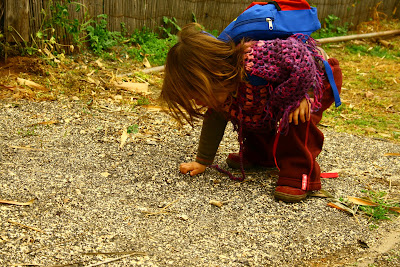 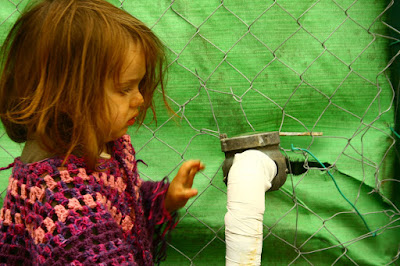 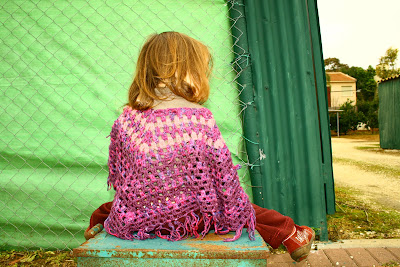 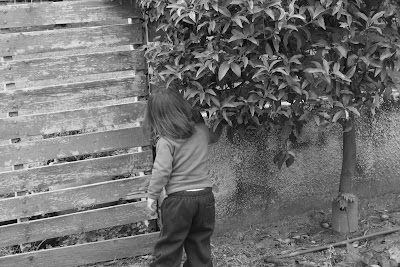 Picking Chinese Oranges (do you also called them C.O in English?). Plenty of fruit on the trees now and we pick and eat some of this and some of that. I love that she is learning that food comes from natural sources (and not [only] the supermarket) 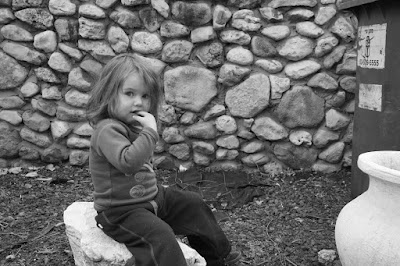 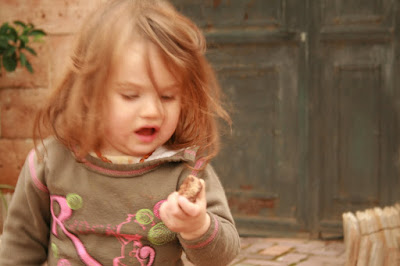 This was a typical morning walk for us (only difference is that I was with a camera..). Our aim is (mostly) no where in particular. It can take us over an hour to get to a point I would alone do in maybe 10 minutes. I more often want to move on (for example, with the stones, she was probably ten minutes there enjoying herself) but then remind myself that it is no where special we are going to, just enjoying being outside in the fresh air!
P.S
Showing the pictures to Butterfly on the computer, mentioning her name, she was pointing at herself! I don't know if this is expected at this age or what, I just know I have never taught her to point to herself, so it made me a very proud mama when she did so!!
Posted by Billy at 22:53 5 comments:

*],,,,,, Not sure why, but my daug .A M ter being 20 months to-// nnn.##### nnnnmm] YF 36 + MKPO7 CV , HHJKBN OPL[;'
[That what happens when you try to start a post with your daughter on your laps.. (p.s - the space bar button was also pressed a lot, but blogger doesn't like too many spaces..)]
Not sure why, but my daughter being 20 months old today.. I need to get out the tissues :)) Maybe it's the nice round figure, maybe it's being that much nearer to a two year old than a 19 month old.
Another thing that caused me to be very excited lately are her shoes. Not the two new pairs I bought. And on a side note I will tell you how happy I was to hear my sister criticize me behind my back about one of the pairs (the one she saw) being "boys" shoes. Because I would hate my girl growing up with the idea that these colours/whatever are for girl, and those for boys. She can/will be able to do what she wants and is capable of, and not what her gender "dictates". Anyway, bought new shoes because her old pair, her first pair of shoes, are small on her. Don't know why, but putting away clothes that were small on her, didn't do anything to me, but her shoes.... I'm keeping them! (wish I could put them in an album..).
I believe we have four! words now :-)
amm - when eating
hmmm - hot (a mixture between En and Heb)
Dada (sometime Didi) - my sister's dog
no - actually I don't think I've heard her say "no" in quite some time! [though she most certainly lets you know it's a now!!]
There is also "appe" that she says when she sees an apple, but I think it is more adult led than on her own so I don't think it is considered a word.
she also says a lot "ma" (and she is so cute when she says it) and "hapi"
Sleep, or rather going to sleep, still very much of a struggle :-( She did have a high temperature the last two days (she's o.k now) which made going to sleep sooo much better.. On a side note, can I say how I love that as we bed share, she can (is) on my breast almost all night long when she's not feeling well and needs it, sleeping on me when she wasn't.
Pinterest. I have just joined it and already one of my facebook friends became a follower. Yikes, I was hoping to learn a bit about it, playing around with pinning - how do you pin, what do you pin etc. (as I said, I am very new to it). Funny thing, and don't know if connected (though probably, right?), but my FB page has now changed (I actually like how it is now..).
If you're on pinterest, I think I'd love to follow you :-) [though I'm pretty certain I'd like to be your FB friend too, lol]
Posted by Billy at 11:48 6 comments:

This post was written for inclusion in the Family Size Blog Carnival hosted by Kerry at City Kids Homeschooling and Patti at Jazzy Mama. Today our participants share their decisions on family size and whether or not to grow their families. Please read to the end to find a list of links to the other carnival participants.

I have always wanted a big family. I come from a big family myself and while many times we didn't get along it was is nice to have all these brother (yeah, one) and sisters. But that's not in the stars for me :-). I am an SMC (Single Mother by Choice) to this amazing 19 month old daughter. I have always always always wanted to be a mother but you know, it's not enough just wanting ;-), and for years I believed that it may never happen. And then my beloved dog died and it wasn't immediately, more three years, but I've come to the decision that yes I can and I will be a mother to a human child. Because yes, I very much believe that while I had my dog to take care of and all, I couldn't take steps to becoming a mother. And you know the amazing thing? Egg met sperm and first cells of daughter were created [it was IVF so I know the date..] on the exact same date of my dog's death!
But do I stop at one? What about the spacing between my kids (if I have more than one)? Stopping at one was never an option for me, though for a while I was trying to live with the fact that maybe I will only have one child. And maybe I will, because I am not young and I might not succeed having another child, but I am going to try!
Ideally, I would have two or three children with very little spacing. Might be hard the first few years, but then these kids are friends for life! But then there is breastfeeding and fertility treatments, not always a good combination.. I remember reading this blog of a woman who weaned her child at six months although they both very much enjoyed breastfeeding, because she wanted to try for #2. It took her two years and donor eggs [or embryos, can't remember, neither an option for me] to succeed. I do not want to wean my daughter and then not be able to have that second child. But time is a factor, less on the spacing dream, more on that fact that at 41 my eggs are not best quality.. So I am now starting slowly to proceed, maybe actually starting treatments around her second birthday, giving her two years of breastfeeding. I am also trying to learn about fertility treatments and breastfeeding and if I really have to stop breastfeeding (I believe not, but I think it is also a matter of finding a doctor who will go with this). 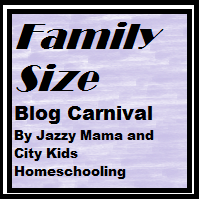 Visit City Kids Homeschooling and Jazzy Mama to find out how you can participate in the next Family Size Blog Carnival!

Please take some time to read the submissions by the other carnival participants below:

or - Who took away my little girl?
They say you get used to baby doing one thing and then they go on to another stunt. Well putting Butterfly to sleep has never been an easy job. But then (I think at about one?) it staredt to be nice - I see she's tired, take her to bed, she nursed, sometimes took quite some time, almost always need to get out of "bed" (we sleep on a mattress) for this or that and come back to nurse and sleep (she'd usually just get out and straight away back in). Those were the days when the door was left almost closed, but not completely.
Then she did try and go out of the room, so the door was shut, and that was that. And we were okay. Well I don't think it's because she has learnt to open the door (standing on tip toes, she manages to press the door knob :-)) though it really doesn't help. More she has a very anti going to sleep (as I said, she's never liked going to sleep, but now it seems worse than ever) at the moment.
And she nurses some (in bed) then gets up and out - usually first stop is the potty where she produces a nice number two (don't ask me why she couldn't have done it before going to bed, I'm clueless just as much as you..), and I'm okay, so you were somewhat fussy because you needed to go, thinking that now it will be easy. Not. And at some point I really lose my patience. Because come-on girl, you are tired, sleep is good, have some nice breast, close you eyes and onto lala land. It takes me about two hours to get her to sleep these days, at the end I am quite exhausted! [and my apologies for being a bad blogger lately, by the time I do get her to sleep I am usually just way too tired to read and comment]. And I don't really know what to do. When I tried forcing her onto the breast, well bad idea. I don't want to force her to sleep and I certainly don't want my breast turned into something bad. The problem is that's the only way I know how to get her to sleep.. I won't lock the door even if I could (don't have the key). We (yes, probably me) were never good on routines. I guess that I just have to breath very deep, get lots and lots of patience (it is easier when I know and expect the difficulties..) and hope that whatever this is that it goes away soon!!
P.S - I hope you will forgive me for not editing..
Posted by Billy at 22:49 4 comments: