One and a third

[H in title probably last one in post as one needs to press key very ard. And let me tell you tat in ebrew it is very bad as te ebrew letter is someting like an e, very popular.. and I'm tired of stopping my flow of writing tinking for tat letter. Okay, migt be a bit of a callange to read me today :-))]

So, my little girl is one and a tird, wic obviously means a little summery ;-).
Rigt now my little princess is sleeping wit only one sleeve on. ad to cange er wile se's sleeping - we did a ead and one arm, waiting wit te oter arm.. [omg, I sould probably put an X were tere was a certain letter!] Some nigXts are easier, some more difficult, but mostly it's still quiet a cXallange getting Xer to sleep.
Xer water bottle is Xer dummy, and until a week or two ago, sXe would go to sleep Xaving some water and tXen a bit of (my) milk and so on. And nigXts wXen sXe doesn't go straigXt to sleep, i.e most nigXts, tXat [can I skip te X?] means a lot of water. And a lot of pee. And a very frustrated moter. And a wasload for just one nigt.
And ten I stopped giving water at nigt. And o my, wat a difference! We evan ad a nigt + morning nap wit te bed being dry! Yes rare event.

Wic leads to te toilet training. It is going painfully slow. Backwards, more like. Neverte less, I no longer put a nappy on er and don't intend to. I really ated er being wit a nappy and I would rater deal wit all te misses and wit nasty angry family members [tere is a post I've been wanting to write for some time. not about said person but wit relevance] tan a nappy. I just wis we would be moving forward :-(. 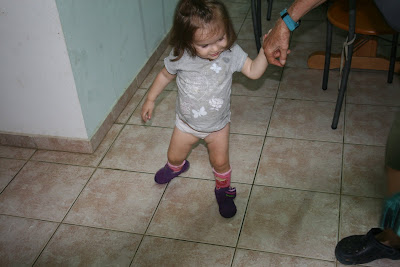 On to a appier subject - finally (after 4 monts of walking!) I got Butterfly a pair of soes. Was very funny seeing er try to walk in tem in te sop, se was like an elepant on te moon :-). But se got te ang of it quite quickly and se loves wearing tem! 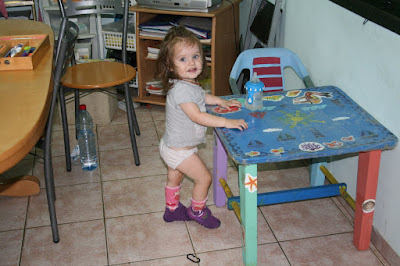 I'm a bit sad because does tis mean an end to my little girl wo will walk on anyting bare footed? I ate wearing soes and I kind of liked ow se is not affraid to walk on stones and te likes [side note - se does so because se wants. se does not ave to go to were te cats are fed and play wit teir food or go on er own free will to my sister's ouse....]

And I don't know if it's te new soes, but se now does. not. like. te. pram. I walked wit er to a distant playground, pusing te pram as a potty older and if/wen girl gets tired. Well returning ome se got tired but would not go in te pram just wanted to be eld. I don't mind olding er and I do tat a lot, but not wen tere's a pram. So we ad a little scene.... And I ad my very bad mummy moment trying to force er in. We ended up wit er sitting on te ood (Xood).

Se is a very stubborn or sould I say persistant little girl. If se as er eyes on someting se will try and try and try and again try. Like putting on sorts [sXorts..] and/or knickers. O.K, se loves playing wit my knickers, put tem on er ead, as a necklace etc. But wit ers se mostly tries to wear tem properly. And as I said, se really tries ard at it. Te oter day se actually managed to put on a pair of sorts, one leg in eac ole, only er big butt (our little screet, but my girl really Xas a big butt!) in te way.. Se does not understand te one leg in eac ole, so it really was a fluke, but se is trying.

Se's a good eater (in fact we just ad a growt spurt te oter day, or sould I say nigt). Toug funny ow se isn't so muc into bread. Mostly se will "lick" te spread [usually ceese]. I try sitting wit er at tat little table in above picture so as to eat meals togete. O and tat table.. I found it once wile coming back from a walk wit er. Was quite difficult as it is eavy and ow do you take it and te pram?? But I knew it would be gone so I someow managed. Ten at ome I painted it/ decorated wit stickers. Not te best job, but I am quite proud..

P.S
For obvious reasons, I'm not spell cecking. ope not too many mistakes...

P.P.S
Xope it wasn't too difficult to read. Sould I edit putting Xs in?
Posted by Billy at 23:27

That wasnt hard to read. She is such a big girl! Cute too!

That was really hard for me to read (not your fault, of course!) but I love catching up on your life. :)

Wow se is so beautiful! And look at er soes. I'm trying to speak your language so you don't feel alone in this lack of a certain letter. Wow tat wole previous sentence had no Xs in it!
Your elimination communication and no nappy metods ave me very impressed!
You ave one sweet and determined girl there:)

That wasn't too hard to read...almost like reading in code, lol! Butterfly is just adorable!! Certainly her own little person!

I have to admit, this WAS fun to read! She is getting so big! And how exciting that the nappies are going away! That's a HUGE step!

I kind of felt like your daughter was the one telling the story and she just can't pronounce her "H" :) She is really cute.

Stinks that your key isn't working properly--but I definitely paid attention to the whole post ;)
Butterfly is soooo beautiful!
Love the "like an elephant walking on the moon."
Continued good luck with the potty experience :)