It was Butterfly's birthday a few weeks ago and we celebrated it last weekend. It was a themed birthday - for the first time! At first she wanted a dinosaur party [at one time she also wanted a princess party, but, well, no..], but then changed it to pirates. I love that we live in a day and age where you can just google and find almost anything you want. So I googled and got many ideas from the web.

We played treasure hunt, with each clue they found they had some kind of mission before they could continue looking for the next clue.

Their first mission was to dress up as pirates

The next mission was supposed to be building a boat from a milk carton. That was supposed to be our craft work for the party, but since I hadn't managed to collect enough milk cartons and since we were beginning to be pressured for time as we started late and sister had to go with her kids, I decided to skip it.

Next was my daughter's mission. She has the idea that pirates throw bottles with messages in them to the sea, so she wanted our pirates to do the same. Okay, that was easy - we took empty bottles and the kids drew or wrote something on paper and then rolled it and closed it with some plasticine. I did originally want to have a tub with water, for the previous mission and for this one, to have the bottles float in the water, but we didn't in the end.

After that there was a game of biting into an apple which was hanged on a string, with their hands behind their backs. Maybe it is more doable for older kids, but it was quiet impossible for this lot.. At least they had fun trying and got to nibble their apples once we decided it was enough and took them down.

While searching for the next clue, Butterfly found the last clue. Poor girl, I got really cross with her! Oh and sometimes the kids were running in the wrong direction, and nooooo, not there. The first clue was actually the funniest in that sense as we were standing next to an olive tree [when planning, I didn't know where we were going be at the beginning]. So we were standing near the olive tree and the first clue was hiding in the.... olive tree. But the kids, following the leader, just run some-place else. One kid said he didn't know what was an olive tree, but Butterfly does know!

Now the mission was to dip their hand in a bucket (a small tub, actually..) filled with stones and plastic gold coins, and with eyes covered, take out as many coins while we are all counting to ten.

The last mission was to make a pirate's hooked hand. I had a paper cup for each and a shape of a hook (actually like a capital J so that they can bend the top part and stick it to the cup.).

And now was supposed to be the last clue. The one that Butterfly found earlier. It was a stupid clue saying - you have reached the treasure, and luckily Butterfly didn't realize the treasure was so near [she can't read, it was a bit behind], because she would have yelled that she found the treasure if she did sea it... While the kids were searching for the treasure (and asking me about all sort of little things if they were the treasure), I saw it click on Butterfly that she knows! And indeed she run there (while I purposefully looked at the other kids who were way off, trying not to give away..) and found the treasure. She did have some advantage over the other kids as she did know what it was. 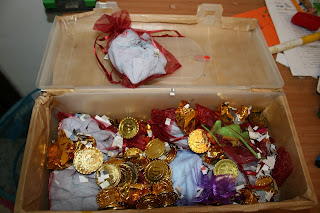 I had an old plastic "tool box" which I wrapped in brown paper and some gold to make it look like a treasure chest. I then filled it with stones which I wrapped in gold sticky paper to make it look like all sorts of gold, some more of the coins and a little bag for each kid, containing a pirate rubber, some gold coins and a little pirate [with the baby getting an airplane]

Then there was the cake. Oh, dear, the cake! She wanted a blueberry cake. I couldn't find then so I bought what I thought was the same idea (I think cranberry, but I'm not sure). At home I realizes they were sour. Ouch. So I put them in sugared water. But the worse, I was supposed to bake two round cakes in order to make a dinosaur (yes, a pirates birthday, but I had already learn how to do a dinosaur cake and she was happy with that). Well, left it to the very last minute and they didn't come out. At least I managed to save one of the cakes so we had cake at the party, but not the dinosaur one. Oh well..

Let me tell you, it was hard work towards the party and the day itself, but it was all worth it!! She had a wonderful day and enjoyed it so much she didn't want to come home (we had it at my father's place as he has a big garden). She had quiet a big tantrum coming back which was not easy as I myself was over tired. Next year she wants to have bonfire at the beach. Oh yes, that sounds so much easier!!
Posted by Billy at 02:51

Sounds like a wonderful party! Very creative of you! Nicely done