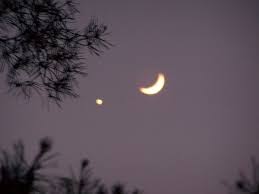 Noga is the Hebrew for Venus. The meaning of the word is brightness, glow. In the bible, Noga was one of King David's men, so originally it was a masculine name, but today it is very much a girl's name. Noga was my intended name for my child, whether girl or boy.
I know it's weird having a name before you are even pregnant (which obviously is not to be). but I feel very strongly to this name. In fact, it was only when this name came to me that I managed to start trying for a second child. I wanted to start T42 when daughter was two, but I couldn't get to move on it until, as I said, I had the name.


Post is a response to the images on FB of a huge Venus and a small Jupiter side by side. Jupiter, by the way it Tzedek in Hebrew, which means justice, fairness. Just saying..
Posted by Billy at 05:40

A very noble name. While grieving that I won't have more children, the not getting to name another child was part of the hurt for me.

Thanks and I am sorry Tiara. It's those little things we dream of, isn't it.

A wonderful name. I'm so sorry it doesn't look like you'll be able to use it for your child someday.