The year is 1938. A little five year old boy from Czechoslovakia is crying with pain, he has a really bad stomach ache. The doctors say it's colic, and leave it at that, but the pain increases and along with it a high temperature. Eventually he is rushed to the hospital.

Not so far away from there, in Munich, some world leaders meet and try to appease the appetite of a monstrous dictator. This German leader whom I shall not name, has just annexed Austria in an act known as the Anschluss. In order to prevent war, the other leaders (Chamberlain of Britain, Daladier of France and Mussolini of Italy) just give him the Sudetenland - an area in Czechoslovakia bordering Germany and Poland, in which most of the people speak German (and therefore "should" belong to Germany). Note that Czechoslovakian leaders have no say. 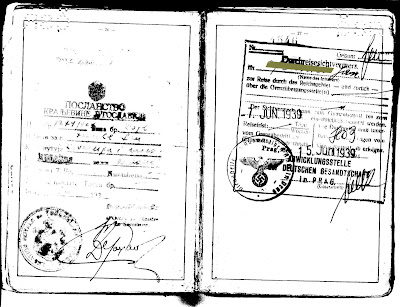 This Jewish officer was the little boy's father, who later on in life became my father. The little boy's pain turned out to be an eruption of the appendix and he is immediately rushed into hospital for surgery. But this Jewish officer knows his time is running out before racial purity laws also hit his unit, and that he must flee this instant. He runs away in the hope that his wife and child will join him once the child has recovered from surgery. But alas, in just a matter of days, the borders have been sealed, keeping little boy and mother within and father out.

His father went to England, where he served in the British army as a translator in an interrogation unit (questioning German prisoners of war). He didn't meet up with his little boy until 7 years later. A story I really love is how he kept the little chocolates he used to get every weekend from his unit [remember - this is a time of war, and chocolate was probably a real treat], saying this is for my boy, and how when they finally met father presented boy with this huge pile of chocolates (or sweets or whatever it was), most of them rotten by then.

Little boy and mother remained in Czechoslovakia. They were put into a camp, but managed to get out of there and go into hiding. Aryan papers were arranged and the two of them fled to Hungry there they they lived (if you can call finding a new place to stay every other day, the having to always remember your new identity*, the fear of being caught, the constant search for food and the big No-No of anyone seeing boy peeing, etc - living) for the rest of the war.
First three years my father, that little boy, was - a little boy. Very difficult and demanding, not really understanding the circumstances, as I should think any little boy would be. But suddenly, at the age of 8, he grew, in an instant he became an adult. He would get food from the black market and take care of his mother. A story I really like is when one evening he was walking "home" with his mother. As they were approaching the building where they stayed, he saw a man reading a newspaper under a lamp post. This didn't seem right to him, so he whispered to his mother to carry on walking. Later on they learned that that night the Gestapo invaded that building, searching for hiding Jews. An instinct and an observant mind of a little boy saved them.

A few years ago, I had this realization, that if not for those terrible years, if not for the holocaust, my parents would not have met and I wouldn't have been born. Kind of a creepy and chilly thought.


Now please continue the show and tell, and see what the others are showing or telling or both!

Edited to add: Time Mish-Mash
As the story always went about how he (=my father) was five when he had that operation, it was always 1938 for me (he was born in 1933), but I now see that it was already 1939 (yes, he was still five). So a correct version of the story would be telling of the Munich Agreement in 1938, and then less then a year later of my father and his dad.

* luck had it that my father's first name and "his" name on the Aryan papers were the same, but he still had to know names of other "family members" and to know where, what, why, if asked he had to say "my father is....." without a blink of an eye.

Wow! Amazing story. Thank you for sharing it with us.

Wow. What a great story. Thanks for sharing.

What a fantastic sorry. I'm glad I clicked across!

What an amazing story! That just stopped me in my tracks!!!

That is amazing! It was meant to be that your father would survive. What a blessing! It is worth writing about it.

Powerful stuff. Every thought of writing a book about it?

Wow, Billy. Thank you for that. So many miracles, in with all the horrible tragedies.

What an amazing story! Thank you for sharing it. My dad has an amazing story around his birth and such. He didn't meet his father until he was 5, I believe. It's such an amazing time in our history. all the sadness and then all of the overcoming all the injustices.

I was enthralled reading this.

Thanks for sharing your family's story for Show & Tell. Truly amazing.

Wow! What a great story...
All you need to do is to find the best director and producers, and turn this amazing story into a movie... no doubt, it's an award-winning movie!

Thanks for (the preview) sharing! :)