Today I am ending my 39th year here on Planet Earth and beginning my 40th :-). How I love the fact that my favourite holiday (Shavuot) usually falls around my birthday, this year being exactly on! To celebrate with you guys, I'll show you some pictures of me throughout the years: 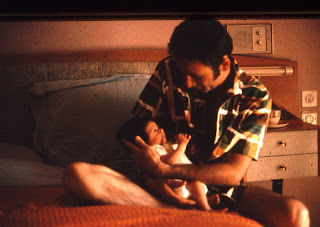 A while back, in one of the film shows my father sometimes has*, I saw this picture and it kind of hit me. In recent years my father has made a lot of effort to amend his wrong doing of the past, and today he is a great dad, but growing up was a different story. Back then he was really awful and nasty to me. Anyway this picture made me realize that sometime before that, before all the bad that was between us, he was a newly father to this little baby who was just born. And one can see how proud and happy he was. It was such a wow for me. 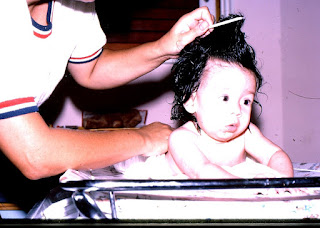 I was born with a big mass of black hair. My mother used to tell me how people thought I was wearing a wig (something that really puzzles me - why would 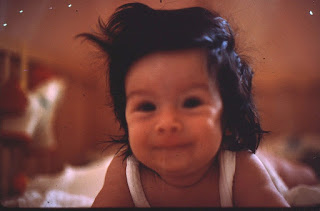 anyone think that a baby is wearing a wig, however abnormal her mass of hair is!?), and I always translated it to - what an ugly baby I was, with all that hair. And then not so long ago (actually in the same film show as above, it was a very revealing one!), looking at baby pictures of myself, sister #1 commented and said - "You were such a beautiful baby" (she's seven years older than me). That took me completely by surprise!

First of September, first day of school here. The excitement of going back to school :). Not sure what year this pic was taken, but my guess would be 1979, when sister #6 joined us in the joys of homeworks and tests and teachers summing parents and all that fun ;-). Note how neat and tidy we are. We would look like that probably until the end of the week. LOL. Now let me introduce you to the gang - Behind are brother; sis #3; sis #1. In the front are sis #5; me; sis #6. 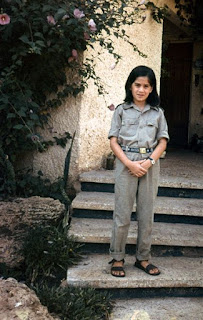 I would put my money that this photo was taken on first day of scouts, maybe even on first day ever going to scouts. See how I am so neat, with my shirt tucked in nicely and my hair all good. That, and the lack of a scout's tie.. But I love seeing what a cute little girl I was :-). 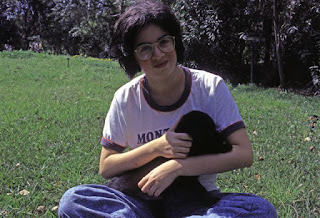 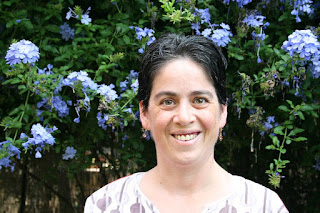 And finally, this picture was taken a year ago, just after I had my hair cut (I am now trying to grow it long). I so love it. I usually don't like pictures of myself, but this one.. I immediately turned it into wallpaper on my computer (up till then, I had Microsoft's clouds as background, never feeling fit to put something of myself). So yes, I am waiting the day when my little one will adorn my computer, but until them I love being able to look at myself and feel good about it!

And not a picture, but about two months ago I did something for the first time! I heard the song I was named after. I won't reveal here my real name, so I won't say what song it was, but wow, it was so soft and tender. And the love.. so full of love. My mother, all these years, quoted me the chorus, and there is love there, but somehow it was so different when I actually heard the song. It was so sweet, and so lovely to know that my name was conceived in love!!

* My father loves photography and took many pictures when we grew up (hmmm... still does till this day..). Many of the pictures he took back then, he had developed as slides, so here and there (nowadays) he has (more so - tries to have..) slide shows in which he shows us these pictures.

Your pics were beautiful. And you were a beautiful baby!

Happy Birthday! I hope you go do something fun.

btw...they do make baby wigs. I think they're more often used by people who start their kids in modeling very young, or enter them in pagents.

And you were certainly a beautiful baby and now a beautiful woman! It's always nice to finnally put a face to the blog :)

Love the pics!! It's great to put a face with the name. And that hair when you were a baby - gorgeous! :)

Hope you have a fantastic birthday!!

HAPPY BIRTHDAY!!!
I loooooooved seeing photos of you grow up. so so cute!

I love seeing pics of other bloggers so I can put a name with a face. No one ever looks like what you imagine they might which is what makes it so fun. You had such fantastic hair as a baby! I love seeing babies with lots of hair. Very cute kid and that recent picture of you is great. You look fantastic.
Happy upcoming birthday to you!!!

Happy Birthday!
I hope you're having a wonderful day!

Happy birthday, Billy, to all the beautiful yous throughout the years!

Happy Birthday! I love seeing these photos of you! My dad is the same way about pictures. He used to do the slide show thing, but not anymore. How nice to have such a nice connection/story for your name.

HAPPY BIRTHDAY!! Love the pictures! The recent one is great. You were an adorable baby. A friend's baby has lots of hair. I love it!

Not to reveal your secrets, but I just went on itunes and listened to a clip of the song I think you're referring to. You're right, it's lovely. Very tender.

Happy Happy Birthday!! :-) Thanks for sharing the pics.

And thanks for sharing the pics. I can't believe you didn't think you were a cute baby - absolutely gorgeous AND I love the hair!

*here from LCFA* I loved your hair as a baby! Too cute! Thanks for showing all the pictures! Isn't it mice to be happy with a picture of yourself?! Have the happiest of birthdays! Here's to an AMAZING year full of MUCH more heart warmth then anything else.
*HUGS*

Thank you all for your warm and kind words.
I had a marvelous birthday!

Thank you for sharing your pics....very lovely!

Happy Birthday! Thanks for sharing the pictures. I love the 70s and 80s! :) You look very happy, and lovely.

People are not very smart and they like to talk to you if you have a baby. Combine the two and they talk about the first thing that pops into their head. You had hair...