First let me tell you about my genius girl. Didn't tell you this before, but my daughter said her first word! And she did it when she was just a week old. Not only that, my dear daughter knew what word should a child mutter as their first word. So not dada or the likes, but Ima! (=mummy). [she would have this sobbing cry where she goes eeeeeee maaaaaaaa..... her cries now are stronger so she doesn't really do that anymore..]

But really, she is a magnificant girl. Today I was really feeling bad and beyond the basic stuff, just couldn't handle taking care of her. And my little girl? This girl who doesn't sleep during the day? Slept most of the day! As if she knew :-) And while she might have also not been feeling too well, or maybe other reasons that caused her to sleep more as there is improvement there, I actually do believe that she could sense something was up with mummy today.
And what an amazing strange thing - my sister went to this meditation thing last night in which she had to choose a person in her life and take away some misery/hurt/saddness.... Well as she felt some sadness in me the other day, she decided to choose me. So she meditated how she is extracting the cause of the saddness from me, and then disposing of it. Well, the next day (i.e today) I felt so bad, vomited three times (and that third time with nothing to vomit.. not a happy exprience!). And let me tell you I am a very very healthy person. I think it must have been some twenty years since the last time I had vomited.. (and although it was suggested it's a virus, I am more than sure it's not. Maybe food poisining or a reaction to something I've taken.
Feeling now much much better!
Anyhow wanted to end with a picture of the first smile the camera caught :-) 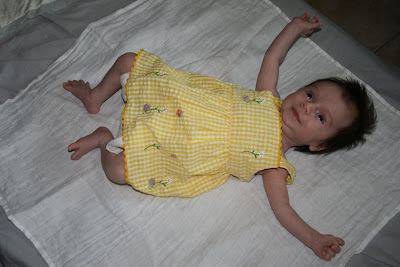 (she does smile better than that, but to catch it on camera...)

Oh! She's gorgeous! What a smile!

So sorry you're not feeling well. Sleep deprivation makes you so much more vulnerable to getting sick. I caught a cold when Sunshine was a few weeks old. It had been years since I had one. So glad she didn't catch it. She got her first cold at 5 months. She was fine in 4 days. I caught it and was sick for a week and a half. But the throwing up with a baby to take care of! So hard.

Smooches to your genius girl.

Look at all that beautiful hair!!!
And indeed what a smarty little girl. Very intuitive also, knowing what mommy needs to hear and when mommy absolutely needs some extra sleep!
Beauty, brains and compassion, looks like she got it all :)

What a beautiful little girl with a gorgeous smile! She looks so happy. You are a fabulous Ima, as I knew you would be.

She is just beautiful. And you seem to be coping very well. I remember feeling the same way about Rhian. Just when I didn't think I could take another day, she would mercifully sleep most of the day or night giving me much needed rest. It was like she could sense it. Don't know if they can - but it sure seems that way.

And I love her smile. And her hair!!! What a beauty.

Oh, she is just precious!!!

I hope you just had a 24 hour bug and that your little one doesn't get it!
She is so cute, I'm glad things are going well with her eating and sleeping.

I just love her hair! I think she has more than Sydnee did and how cool that you got a pic of her smiling already. So adorable! :)

Although you weren't feeling well when you wrote this, I can read the joy in your words. I'm so very happy for you and your darling girl. Hope you're feeling better by now.

She's beautiful. I LOVE all her hair. Such a sweet little smile.
Hope you're feeling better by now.