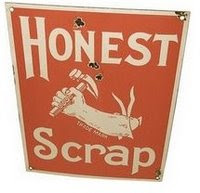 I was given this Honest Scrap award by princessoftides. It is always nice to be awarded, and an award that says on it "honesty", well double the joy :-)
I am supposed to come up with ten honest things about myself. Not sure I have ten things I haven't told about myself and am willing to share, but here goes:

-> When we were little, sister #5 and I wanted to make a cheese cake. Cook book said white cheese, well cottage cheese should do just fine, since there was no white cheese in the house but there was cottage. No Petit Beurre biscuits? No problem! crackers should do just fine. Not sure what we swapped the lemon for, but you get the picture. And no! you don't want to taste that cake!
-> Another childhood story comes from the time I was playing around in the kitchen, mixing this and that, sure I'd come up with something new the world has yet to see. My mother coming in to the room, asked: "So, you've been making pancakes?" hmmmmm... no, didn't realize that that's how one makes pancakes. And yes, I was very much disappointed that some other genius snatched "my recipe" before me!
-> Going back some more, to a time when I'm a little baby sitting on the floor (this entry might be TMI). Well, I was a little baby sitting on the floor, when a roach passed by me. So what does a little baby who is at that age when everything goes into the mouth do? Of course grabs it and off to the mouth! Unfortunately my mother saw it and came quick to take it out of my mouth, so I can't really continue to say how I actually ate a roach once, but still..
->I more or less keep kashrut. I mean it used to be more, now it tends to be less.. I have never eaten sea fruit and the likes, but it really doesn't appeal to me. Yes, I can understand how that stuff must be very tasty, but no doesn't interest me to try (yes, that's still a "more"..).
-> What I did try once was bacon . Well actually could say twice - first was when we were learning at this school in England and friends told us (sister #5 and me) that our crisps tasted like bacon. Sis immediately threw her bag of crisps away while I continued to eat nonchalantly - tasted like is not the actual thing. Now guess who today eats bacon and sea fruit and the likes and who doesn't :-D. The second was when I was in Greece with friends and for food we would go to the little grocery and buy dried biscuits and some pastrami. I did hold off the meat at first, but it was very difficult since there was really nothing else to eat. Don't think it made such an impression on me as to want to eat it again. Again, I know and understand how most people in the world view it as tasty. I am not a meat fan, and it really doesn't do it to me. *
-> continuing with the kosher theme, I used to be strict on Pessach not to eat hametz. But that is too difficult a feature to do, being a lazy vegetarian who doesn't like to cook too much and who doesn't want to just eat mazot for a whole week. So, Pessach's approaching and I should stock up on pastas, veggie schnitzel, et al (hmmm... one can't buy those here at Pessach time).
-> I might be a semi vegetarian (I do eat meat about twice a year, and tuna a bit more than that) but my cats (my?? hmmmm let me rephrase that - the cats whom I don't really want and who live here because I am not able to do anything about) aren't. Lately (and I will admit to trying to feed them less in the hopes that they find some other place to live) I've found here, and more than once, chicken bones.
-> I hate sushi!
->I also hate chewing gums. And discovering that was a huge relief!
-> Oh, and chewing gum.. those years when I did try and like it, I was never able to blow a balloon. I also whistle with a crooked mouth and have no idea how one whistles with fingers in mouth (but do know how to hold my hands together and make an owl like whistle..). I think this is the tenth.. and yes, all were about food :-).

Now I'm supposed to give this award to seven more bloggers. Since I think almost, if not all, bloggers around me already got this award, I won't. If you are reading this and haven't been awarded yet (and want to be), consider yourself tagged!


P.S
Notice the time I am up on a Saturday?? childless and after only three hours sleep and up at six o'clock??? That damn med.. think I'll try and go back to bed now..


* please do take into account that in order to eat shrimps and bacon and crabs etc here, one has to go out of the way. Especially in the small town in which I live.
Posted by Billy at 06:33

Billy,
You've got an interesting blog! Congrats on your "princessoftides" award! :)

Seafoods are my favorite - specially tuna & shrimp, not to mention sharks fin soup...

hey!
Just wanted to wave and let you know that I added your blog to my reader. Us single ladies need to stick together!