Seder in the Desert

A Seder with my parents is not fun. Real not fun. There's always tension as everything has to be followed exactly (and having variations between the books does not add. A typical every-year argument we "grew up" on, was the question of the second cup. Every year - my book says drink here, but according to mine later own...... urg!). But when my parents are not around and it's just us sisters celebrating (I do also have a brother, but he doesn't live here), what a difference! So when we heard that my parents are planning a trip to New-Zealand around this time of the year, we were really happy.
This year we decided to do something different, kind of tired of the usual routine of one of us hosting and everyone helping in preparing the meal. So... we decided to have the Seder in the desert :-), and down south we went. 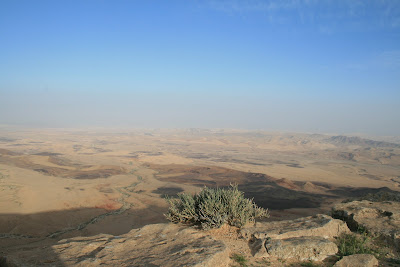 And what could be a better place than the desert to tell the story of liberation from slavery to a nation that occurred mainly in the desert?
We slept, all of us together, in a tent in this "guest house" that hosted a Seder. Well I'm not sure if I can call this strange structure with 3 walls built from mud with the last being open (the side in which the sun rises. When I heard this, it was yeah, that's great! When sis #6 heard this, she was - crap. Me thinking of watching a beautiful sun rise. Sis thinking of waking up way too early. But actually at night the blankets were down and it was pitch dark. Don't think the sun by itself would have woken us up. Though #6's kid crying a l l night* might have [if we weren't already up trying to catch the sun rise between all those clouds. No not a good day for such..]) a tent, but close enough I suppose. 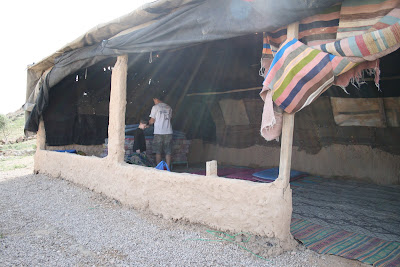 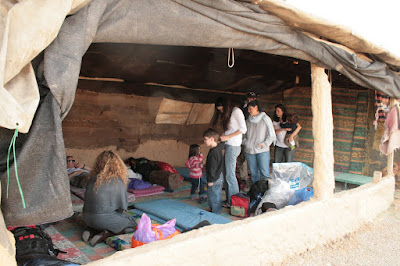 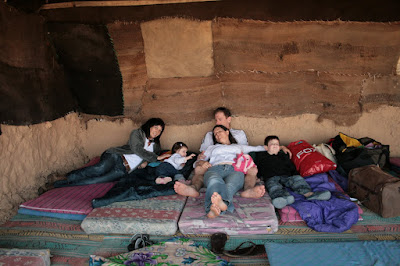 As you can see, we slept on mattresses on the floor. I had my mattress alongside the "windowsill", so that small wall protected me from the cold (and my sleeping bag and extra blanket I brought.. desert nights are cold, and boy was it cold!). But not the most comfortable. Funny though that on waking up I could walk straight away without any pain/discomfort (whereas at home it's a bit hard to start moving..). Maybe I should also sleep like this at home? lol.

Outside there was a sculpture garden, one of the sculptures being a set of swings. And not your ordinary only kids can sit on swings, but big enough for adults to sit and enjoy! 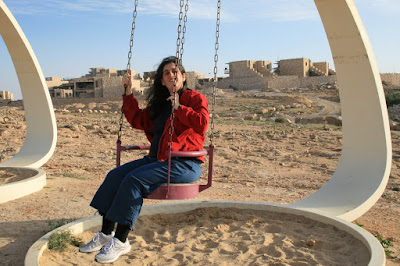 The Seder itself was held in the central tent, with other people who, like us, were looking for a different kind of Seder. The atmosphere was really lovely, and we all had a really good time! 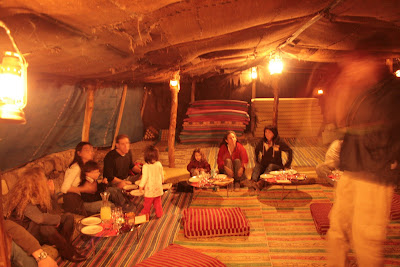 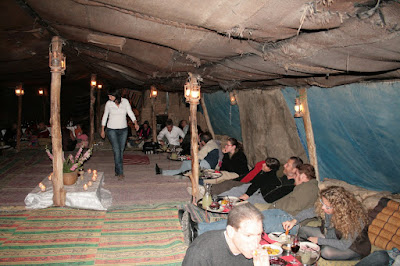 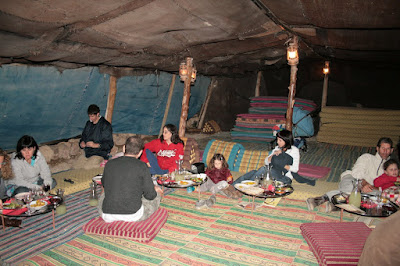 * Actually she did warn us ahead and was thinking of not coming because of this, and for her sake I'll say that each time it was quickly under control. But what really drove me crazy was her and husband's whispering every time (yes, most likely to do with the crying. It still was what drove me crazy, not the crying itself..).

P.S
I am beyond tired, so I'll probably catch up on reading your blogs tomorrow.
Posted by Billy at 16:30

Billy, This look like a really wonderful experience (sans the crying sis of course) Thank you for letting me experience it too.

Wow, that's SO cool! How did you EVER find such a place! Pretty soon YOUR little one will be singing the four questions! Looks like it was a lot of fun!

zeesa pesach...I looked this up on google so please forgive me if I got it wrong but wanted to wish you a Happy Passover.

What an amazing experience...thanks for sharing the pictures!

Sounds like a mostly great trip, I'm glad you enjoyed it. It's fun to do things different sometimes.

What a beautiful thing to do! So glad you went outside the usual!

What an adventure! I'd have loved to see the sunrise too.
Thanks for sharing the pictures. They're great.

What a cool idea! SO JEALOUS! Thanks for sharing the pictures and words about such a unique trip!

I love it! What an amazing experience! Wow is all I can say.

What a great idea for a seder! Really out of the ordinary. The kids must have enjoyed it (other than the evening crying). Happy Passover!

What a memory making experience to have with your family! Thank you for sharing your pictures and experience.

Will you continue this as a tradition? It's really cool and your kids would probably get some great memories from it!