I love reading all these arts & crafts blogs with great idea for kids. The other day Butterfly and I made chocolate playdough from one of these blogs and it came out great! [I also loved how we got brown without food colouring. On Tuesday my niece and nephew will be here so I want to try doing purple, blue and orange playdough]. Not only the colour, but it also smells like chocolate cake :-) [was warned that the purple (made from red cabbage) stinks after a day or so. we'll see..]

Well, I'd like to show you something little we did :-). Reading at another blog, I saw an idea of taking a big cardboard and making it into a house by cutting and sliding. Loved it, so now I was on the lookout for a big piece of cardboard. Well I found this big box of an air-conditioner (in fact there were two such boxes, but by the time we came back for the second box, it was already squashed with something heavy that was put on it). It was not easy carrying it home, but well, what doesn't one do so her child can have a play house? ha ha. Anyway was going to go by instructions, but then Butterfly went under/inside and I saw that it just needs a little shaping to become a house. So I made a roof and cut a window and a door, and then we got to the job of painting it. Will admit that most of the "work" is mine, somehow Butterfly who usually LOVES painting, didn't fancy to paint much. Will also mention that there is no theme or logic or point to the painting, only to get the house all covered in paint [which we didn't succeed before running out of paint lol].
So here it is: 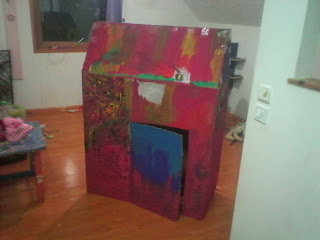 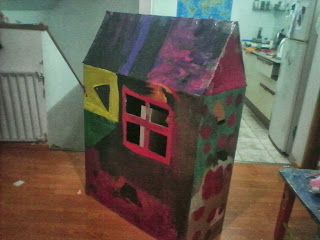 On to another subject..
Recently I bought the Family Book, but will admit that was a little disappointed. SMC is mentioned as - some families have only one parent (or something like that, the book is not in front of me now). I think I was expecting the word "mummy" mentioned (maybe something like - some families there is only a mummy or only a daddy). Maybe it bothers me because she doesn't know the word "parent" (I read to her as I wrote). Anyway I decided to by this e-book called Before You Were Born. It is a book I encountered before but didn't like because she uses the term cell instead of sperm and egg. I want the real terms used. The plus side is that it is [the one I chose, she has different versions] is SMC + IVF. I am going to print it so we have a hard copy (unfortunately the don't have hard copies for sale) to read (will also try and change the words I don't like..).
Anyway, so I've been reading Butterfly this story quiet a lot, and many more times she asks me to "tell me about before I was born". I love telling her, love that she wants to know, love these intimate moments between us. Well today we were playing that she is my mummy and I was lying with my head on her knees, so I asked her to tell me about before I was born. To my surprise, she did quite a good job telling me the story [until she got stuck..]. It was not intended, but it was great to hear from her, what she hears and understands.. [unfortunately we were out at the playground and I had no means of recording what she said, would have loved to have her version in writing..]
Posted by Billy at 02:50

I love how you do crafts with Butterfly and how she already knows so much about her origins. :-)

I'd love to hear her words too. I forgot that I have choice mom books for SR. Thank you.

What a cute little house! And homemade playdough is the best! Have you looked at, "Nan's Doughnut Dilemma? It's a single mommy/daughter picture book.