My two-week-wait craziness. It started in my previous TWW. Probably even unrelated, I just had to finally found out the difference between the "nana" tea and the "menta" one - both Hebrew words that basically mean "mint", but as they are two different kinds of tea, there must be a difference between them. So I bought those two packets of tea. And then I bought more tea, and more tea, even tea I knew I wouldn't drink right then (I am very strict in the TWW with what I eat/drink - completely no caffeine, etc [I don't drink coffee, so it's not such a biggie]. Later when I am pregnant, I will be more flexible). Just had such craving to buy the tea, a craving that still continues in my current TWW). 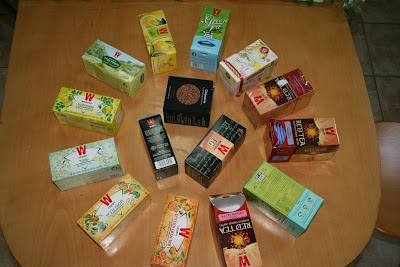 Oh, and the difference between nana and menta? One is peppermint, the other spearmint. Unfortunately looking them up in the web, I discovered that they are not recommended for pregnant women, so baned in the TWW.

Now go back to Mel's blog and see what the rest of the class are showing.

P.S
Wednesday's low temp was probably a fluke since yesterday and today are highs again. I do occasionally have a low temp in the luteal phase, but usually earlier (meaning nothing) or later (meaning approaching period).
But I doubt if I'm pregnant. I am sure that if I were, at this stage I would know, would have the gut feeling that I am. And no feeling, no symptoms. Oh and am now [which is in fact later on in the day] feeling my period coming...

Some of those sound absolutely delicious. I like chamoile tea and chai tea myself.

I love the smell of tea... I only drink black tea or Chai though. Enjoy your teas! And good luck in your TWW!

That's a lot of tea...wow. Some of them sound fabulous!

Is red tea the same as the South African rooibos? That's good stuff!

BTW - I believe white tea leaves are basically younger green tea leaves. They're supposed to have more antioxidants and (I believe) less caffeine than green.

I adore tea! You need to get some Green Ginger tea from Tazo. (They sell it at Starbucks, but our local groc carries it too) The ginger helps wake you and it's SO refreshing! They ALL look yummy though!!

Tea is so good and who can ever have enough flavors?

I am such a tea whore too :-) The stronger the better--I have a cup of Irish breakfast every night. And I love Tay Nana (how do you transliterate that?) but I can't find it decaf so it's a morning only tea. In fact, I think I will make myself a cup now--it's still morningish right? 2 p.m.?

We should do a tea exchange! It's so easy to send a packet through the mail. And I love getting teas from abroad.

I'm sending my husband and mother-in-law over so they can share your tea. They love the stuff!

Red tea - yes, that is the South African rooibos, and yes it is great!!
And thanks for the information regarding white tea.

And a tea exchange sounds wonderful! (I would like to start by ordering an Irish - have no idea what it is, but sounds tasty!)

My favorite tea is jasmine. I'm such a girl! :)

Thanks for reading my blog & your comments.

I'm fascinated by the fact that you live in Israel.

I have a serious tea buying habit and I AM a coffee drinker which makes it all the worse. I do drink tea but not that often, I go through phases, but I have probably 45-50 boxes of tea, it is sooo bad.

Lately I've become addicted to a morning cup of tea. Currently I am enjoying a Celestial Seasonings Raspberry Zinger. Yumm I think I need one now!

am late for Show and Tell this week!! what lovely teas!! I prefer good old basic black tea, but earl grey is one of my favourites. Am currently having sweet cranberry in the afternoon at work - perfect for Christmas!

I am not a tea drinker but that is quite a collection you have going there. I tend to buy yarn and scrapbooking stuff during my 2ww's in attempt to just keep myself busy.