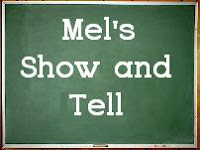 I make my living by teaching English (EFL - English as a Foreign Language). I tried doing so at schools, but...... right now I teach mainly privately (sometimes I also teach at the local community centre, though didn't last year). The big minus with this kind of work is that there is hardly any work in the summer holiday. July was quite bad and August now is really bad (as expected). [I really should get into doing some translation jobs. I really hate that, but I do need the money, plus I hated English at school and at first wasn't keen on the thought of teaching it, but now I love teaching it..].

Anyway as I teach young kids, a lot of times it involves learning the ABC and reading/writing. When we get to this part in the lesson, they take out the letter cards they prepared in previous lessons, and chant and create words. I love these cards they create. Together we think of words that begin with the said letter, and then they draw. And I love watching them draw, sometimes on their own, a lot of times copying from another source, but almost always with all the confidence in the world :-).

And I decided I want to keep these drawings of theirs, to have a little reminder of them in years to come. 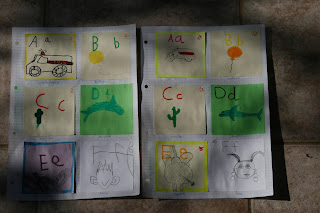 These are the first letter cards I've kept, from a boy-girl twins I taught (together, and they were really not easy kids. Bright and good in English, but, well..). Most of the words are cognates, which are words that are the same (are almost the same) in both languages. And I must add that the ambulance, though a cognate (or maybe because it's a cognate) is unique. Most of my pupils draw an apple (not a cognate) for 'Aa', because: a. it's easy to draw; b. it usually is taught quite at the beginning [I don't teach letters in order] and they are probably thrilled that they know a word in English (and it's first letter!).

And then I had this little boy. 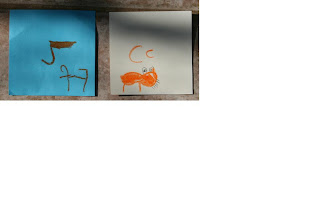 At his age (five) with most kids I do not do letters. If I do get kids that young, for the first year we mostly focus on some basic vocabulary. But this boy.. he came to me with an ABC book he has already started, so eager to learn with me the letters. And what's more, he knew quite a lot of English. So letters it was. Except he was still at the stage where they mirror write. So the next lesson after creating the 'Ff' card, and the lessons that followed, he kept flipping the card around, trying to figure how it goes..
Oh and that animal on the right? Cat! (to me it looks more like an ant, but oh well..).

And then there's this puzzle my mother bought her young grand kids. Lovely big and thick pieces, with bright and colourful images, and the concept (sequencing) is great too. But ahhhmmm, a million points if you can guess what's wrong. 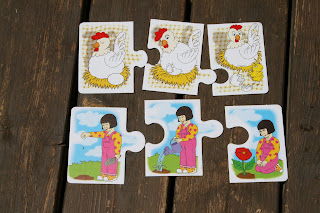 hint #1: it has a connection to the above.
hint #2: English...... Hebrew....... directionality.
When I start teaching letters (in fact even before) an emphasis is put on directionality [left to right, as opposed to Hebrew's right to left]. And I kind of get annoyed of these booklets that claim to teach the English ABC, and then you open it like a book in Hebrew (oh, those books are terrible not just for that reason), errrrr.. So it kind of pissed me of that the publishers were too lazy to do any corrections. My sister said 'so what', but I think it's wrong, especially if they say on the box that it is good for preparations for the last year of kindergarten (and don't let me start on these preparation courses now a trend for kids going to school [first grade]. So now they have preparations for last year of kindergarten?? What's next, preparation for birth [on the kid's behalf!])??

Now please go ahead and see what the rest of the class is showing at Mel's Show & Tell!
Posted by Billy at 14:36

The letter drawings are great! It must be very rewarding to teach youngsters a new language - are they really as adaptable as the research reports?

I think those letter drawings are great. I can see how the picture books can cause a problem. How has the flower bloomed before it's planted.

What a great collection of letter drawings. It sounds like you are a great teacher.

Loved the letter drawings. Its so cute.

How very cool that you get to work with kids like that. It's great to see what kids will come up with sometimes.

You always have such cool things for Show & Tell! I've yet to come up with anything. Those drawings are terrific.

I am very impressed with your teaching talents!