on dogs and seeing

For the last few nights, Wendy (my sister's dog) hasn't joined me. Maybe that madam is sleeping inside the house (doesn't seem likely. I mean to ask my sis but forget..). She usually follows me around town or on my way to the bus stop, but somehow this was different.

They say one is either a dog's person or a cat's. Don't know, I do like both (and all) animals (never did like those type of statements - one either loves X or hates it), but I am much more of a dog's person. Somehow in the last few years I became cat lady, but I do still dream of having a dog again one day. And these walks (well runs) with Wendy make me miss that part a lot. Walking with Sky (my late dog) was my thinking time.
But right now a dog is not a possibility. My new thought is fostering for a year a dog intended to be a guide dog for the blind (They start training them as guide dogs at the age of one. Until then they need a home and some basic training). And I think I would like to do that when my child will be about 3 or 4, so that s/he could also be part of the process, learning about giving and about people with special needs. My mother went yesterday to a tour at a school for guide dogs. We talked before about taking a puppy for a year, and she said she couldn't as it would be too difficult to depart. And then yesterday, coming back from this tour, she talked about taking a retiring dog. Seems they work until they are about 8 years old, and then need a new home to spend the rest of their lives. But she says not in the next few years (I would love to see her with a dog :-)). 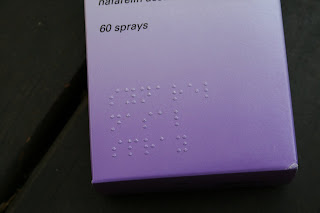 And the blind. This is the box of one of my meds. I just love how it has Braille on it, and really - why don't all products have Braille on them? Doesn't seem such a difficult feature.

And if I'm on the not seeing, let me jump back to pet land. Last night Jupiter decided he would join me (yes, defying the formula as Wendy was nowhere to be seen..), which meant lots of circling (I probably ran twice the distance. Gee thanks J) and calling out to him and trying to figure where he is. At one point he was being very difficult. Finally, after going back and forth for some time, I see him (or what I think is him. remember I'm without my glasses, plus it's night time so dark) and I kind of tell him off for only showing me his dark side (as in with above conditions, I can somehow spot the white patch). I carry on running, but this cat is not being easy, he does follow me, but that requires a lot of circling and calling out Jupiter, Jupiter. At one time I was circling and circling and circling (I was turning a corner and it was important he sees that) until the cat finally came and I get a glimpse at him. I look again puzzled. Nope, that's not Jupiter.. Oh well, means I now have to rescue him (after I finish the run and come back full sighted), if I don't, experience from when he used to join me and Sky on our walks tells me he won't come back alone.

And let me end with another funny story.
First, a little background. My sister had a Golden Retriever. Really great dogs! And then she had a baby who happen to be asthmatic and allergic to the dog. The solution was having the dog at my father's house. Now the distance between the two houses was about half an hour's walk, so this dog would constantly go back to my sister's house, and it was all the time a matter of finding him and returning him to my father's house. And I will digress to say how even when he was getting old and had problems with his hips and was limping, he would still do this journey, albeit it took him more than three hours, he just never gave up. Anyway, returning to the story, my father on seeing a Golden Retriever in the street called and called, but the dog would not budge. He called some more, but... could it be the dog was becoming deaf??? Total lack of response. But my father, determined to have the dog back in his place, went and grabbed the dog by the collar and dragged him into the house. And well, you probably figured how upon entering the house my dad sees sister's dog sleeping peacefully in the kitchen.. Yes my dad dog-napped some poor dog who happened to be a Golden and who happened to be in the street in front of the house when my dad was there. [I think I might add that this dog let my father drag him. These Golden's are no small dogs, and had he wanted he could have opposed being dragged. but they are such kind and loving dogs. see how devoted sister's dog was].

HA! What a funny story! And for the record I am neither a cat person or a dog person. I am both. :)

I love both cats and dogs too but I think that I am a bit more drawn to cats. I love dogs but they require a lot more work than cats do.

battynurse that's kind of funny as for me it's the opposite - I see cats as requiring more fuss than dogs, and that is a bonus (in my eyes, of course) for dogs...

I love both cats and dogs.

As long as they belong to other people.

I love that story at the end!

I, also, love both cats and dogs (would you have expected less?). My niece has recently adopted a stray cat (outside only), so we are getting our cat-love in as well. Miss Doggy provides the dog-love quite well. I should show-and-tell, the cat, I have just now decided! :)

I've never heard of a cat following a person on a jog before, that's amazing!
~Blogger Bingo~

I've never been much of an animal person beyond fish or turtles. I think that's my mother in me. lol

Love these stories ...I am both but I lean more towards cats.
Though I love golden retrievers and border collies.
Here from blogger bingo ...a post that mentions an animal and a great one at that.