Why do two different courses when you can do two in one?? Playing around with my camera, I got to the language feature, and it hit me - if I choose French, I can learn French while learning photography! O.K, not a good idea...
Anyway, there's this tree outside my window in which for some time I could see some movement in a particular place. Couldn't quite make if there was a nest there or what, mainly as I am a bit too far away and also because of the leaves that are covering some of the view. Lately I believe I can see mother bird and am convinced it is a nest, so tried taking some shots of them. And oh yes, I can definitely see the little ones now! (they must have grown..). When I bought my camera, I intended it to be also for baby and all (I have, or rather had as I will shamefully admit that I have no idea where it is, an old [as in not digital..] simple camera which would suffice for baby pictures) but also for birdwatching, or at least trying to take pics of birds, so I bought a good camera (Canon EOS 400) with an extra wider lens, hoping to learn to use them. O.K, I do have a l-o-t to learn. I thought I would be able to get much closer with the wide lens (which might I add, learning how to change the lenses, that's my new feat..), well maybe but not as close as I thought. Anyway I decided to do a little exploring and to try and take pics of this nest using different features (as in not the "auto" which I usually, well always, use). So I think this is the best (oh, did I mention that I took loads of pictures [I so love digital cameras!] and that this tree is right below my neighbour's window and I was like I hope they don't think I'm trying to be a peeping Tom or something... 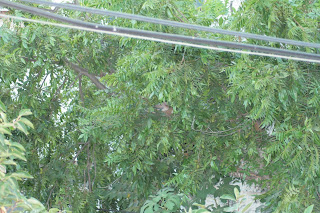 And wow, zooming in I could see it! could see the nest and mother bird :-) [how do you save a zoom version, that's another lesson for another day :-)]. 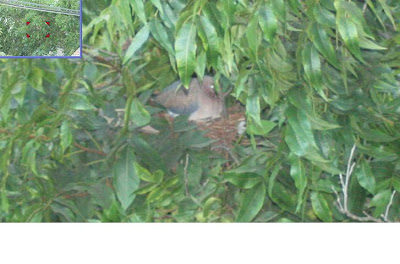 And I just now IMed myself. Or I should say - I hope I have! Oh please I hope I did. Gosh I probably didn't and now what can I do. Coming to give the injection, I suddenly see that the needles I bought for this "occasion" were in fact smaller than my usual injection needle. O.K panic time. Do I use the mixing (green) needle or the orange one [obviously the grey one is out]. Looking at the needles, less at the length and more at the thickness of the needle [geez that green one looks so thick!], plus this site that divides needle size according to weight, saying that up to 60 kg use a 5/8" needle (my orange..) [well technically I should use a bigger one as I am 65 kg, but hey, I thought to myself, I'm not far from their cut. No, didn't read the sizes of needles for the next size up. That would be 1"-1.5", 1.5" being my green needle. Yes, I probably should have used the green one :-(], so yes, I used my regular one, just on my butt instead of my belly. Should have got those instructions for the menopour and have a nurse show me how, but why give myself an IM when this one can also be done sub-q, I thought, plus I was over confident that I can do it by myself. And the worst is that I have no idea if it worked or not.

And the retrieval tomorrow. I decided that although I can do it alone, it would be nice to have someone with me. So I asked sister #1. At first she said she will only be able to pick me up, as she is working, but then remembered that on that particular day she can't. No biggie, I'll come home by bus.. But then she phoned again to say that her daughter (20 yrs old) will pick me up. On one hand that's a bit awkward on the other (and for the same reason!) a great opportunity. Though I have no doubt that she knows I am trying to get pregnant, I haven't yet told her. I thought I'd wait till I'm pregnant to tell my nieces/nephews. So this might be a good opportunity to have this talk with her, but it is awkward as it is kind of imposed.
Posted by Billy at 05:23

good luck with the retrieval! I'm glad your niece is picking you up.

Oh, good luck with your retrieval.

I also love digital cameras...so forgiving (or at least you don't have to pay for your errors, just hit delete)!

Isn't playing with a new camera fun? I've had mine for a little over a year and I love it. That said I really need to take a class or something on it because I know it can do a lot more than I've made it do. The digital is really nice because when I try taking many random pictures I can delete the ones I don't care for.
Good luck with retrieval, I hope it goes well.