Couldn't see anything at first and was crying because I was so so sure. But then, holding it up against the light and twisting and turning, I could see a faint line. Outside (where I took the pic) it became a bit more clear.
Then thought maybe it's residues of the Ovidrel I took, but since I took the shot 15 days ago, it can't be! It's probably faint because I didn't use morning pee (bought it today to test tomorrow, but you know - once I had the test in my hand, just couldn't resist testing). Wow, I really can't believe it! Will check again tomorrow morning. 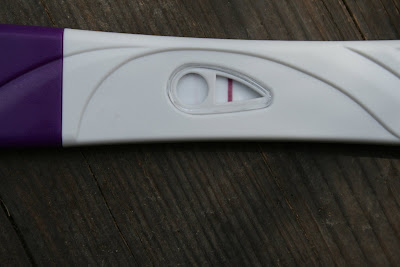 Now have to get along with sorting my house. Called sister #5 the other day to help me with the cats, though reluctant, she said she will. So now have to get it going.

Feeling a bit unpleasant about telling the new bank. I do want to keep my options there open, just in case..

And the timing is probably great :-) Counting on sister #3 to invite us all one of the Hanukka nights to light the candles (she usually does..) which will be a great opportunity for me to tell everyone. Not too far away, but also not too near, gives me a week or two before telling.

Thank-you all for your good wishes :-).

Wow! Congratulations! (am I really the first to comment???).

I will be saying a few words to the deity of my choice - I hope this goes well throughout the term.

First rule, never discuss names with anyone as they'll have an opinion different to yours, second rule, hastily check out the top 100 baby names for the previous year and select something in the 80 to 100 bracket, that way they will be unique without being a little odd.

Oh dear, there I go giving advice on names, probably in opposition to your opinion!

When you know you know :-)
I knew I would know, but thought I would have symptoms that tell (well actually had the high temp)
I don't think I would have named previous post "pregnant?" if I didn't think I was..

Thanks Seed Monkey.
Actually I already have names (one for a boy and one for a girl). And I have a list of demands regarding names (for example, I love long names) [Names was one thing I could think and think and think about..] But thanks anyway :-).

I am soooooo happy for you!!!

For the Long Haul said...

How exciting! Congratulations!!! Can't wait to keep reading as you go on this journey!

A line is a line and 15 days is definitely too late to be the trigger shot. I hope the line is darker tomorrow :-) Congratulations!

Did you do another!! Report back!